The store will not work correctly in the case when cookies are disabled.
Menu
Account
Settings
Currency
€ - Euro

Liposomal vitamin K2D3 is a perfect blend of vitamin K, which guarantees strong bones, and vitamin D, which covers a broad therapeutic spectrum. Supplementation with vitamin D3 would reduce the risk of contracting Covid-19.

30 ml liposomaal
€ 42,75
Add to Compare Add to Favorites
Skip to the end of the images gallery 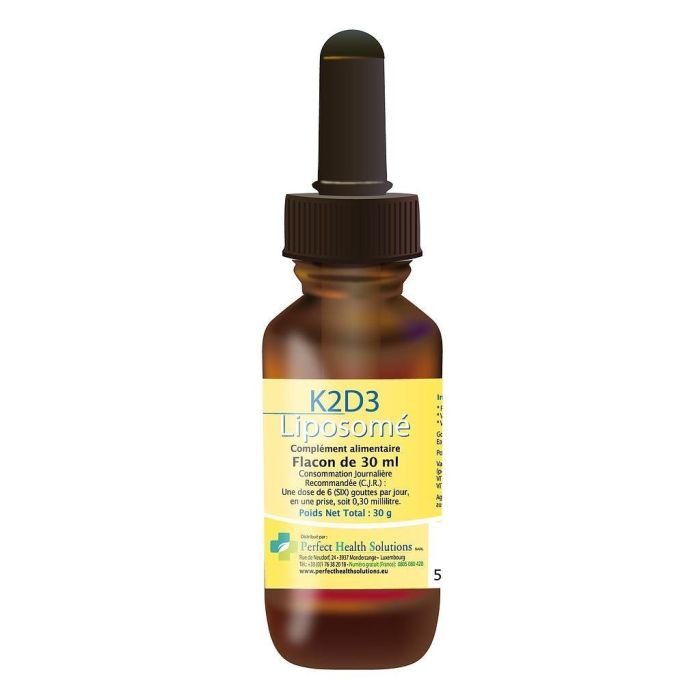 Skip to the beginning of the images gallery

For a decade or so, vitamin D has often occupied the first deficiency that has been denounced because of our way of life that does not fit the purpose of human beings, and that among other things because of the lack of contact with nature. A growing body of research shows the important role of this vitamin in at least 17 different pathologies , including cancer, heart disease, stroke, hypertension, autoimmune diseases, diabetes, depression, chronic pain, osteoarthritis, osteoporosis, congenital malformations, periodontitis, etc. These studies also show that at least 50% of adults over the age of 50 worldwide suffer from vitamin D deficiency, which affects a large proportion of young adults, as well as a large number of children.

Suggested use
Shake before each use. Keep refrigerated after opening. This product contains soy extract. The normally recommended dosage is 6 drops per day (0.30 ml) diluted in a little water. 6 drops of liposomal vitamin D and K2 correspond to 3 mg of cholecalciferol (vitamin D3) and 1.5 mg of menaquinone (vitamin K2).

What are the actions of vitamin D?
The role of vitamin D in the prevention of osteoporosis and in femoral neck fractures in the elderly is currently well established. However, the benefits of vitamin D go far beyond skeletal health. This has been demonstrated by quite fascinating clinical and epidemiological studies.

Vitamin D reduces mortality
Several research findings have shown that deficiency increases the risk of death from cancer, cardiovascular disease and type II diabetes. Remember that these pathologies are responsible for about 70% of deaths in our civilized countries .

Vitamin D and the immune system
Researchers have also proven that this vitamin intervenes in the immune system by protecting the body from infections . For example, people who are deficient are more likely to suffer from colds and flu during the winter months. In addition to its immunostimulating effect, vitamin D also has an immune modulating effect , that is, regulating immune elements. This explains its beneficial effect in diseases with an inflammatory or autoimmune component.

Vitamin D and cancer
The researchers explain that this vitamin not only helps prevent various forms of cancer, but can also slow the progression of the disease in people who are already affected.

Vitamin D and the heart
Another proof: even moderate vitamin D deficiency can increase the risk of cardiovascular disease. It seems that people with deficiency are twice as likely to suffer heart attacks, heart failure or strokes, compared to those with high vitamin D levels.

Vitamin D and memory
Other results show that men with lower vitamin D levels are the same ones whose intellectual abilities decline the most with age. A team of researchers from the University of Los Angeles found that vitamin D and curcumin would be useful in the prevention and treatment of Alzheimer's disease.

Vitamin D and muscle tone
The beneficial effect of vitamin D on the osteoarticular system is associated with an increase in muscle strength. A study in a nursing home among seniors showed a 22% reduction in falls among residents supplemented with vitamin D.

What are the actions of vitamin K2?
As with vitamin D, there are two forms of vitamin K. Vitamin K1 is found mainly in green vegetables, in certain vegetable oils (rapeseed or soy) and in the yolk of raw eggs. It intervenes in the phenomena of blood clotting. Vitamin K2 is produced by our own body and more specifically by the intestinal flora, provided it is in good condition. Nevertheless, it is possible to find it in food in fish oil, in yogurt, in cheese, in milk and in the liver.

Vitamin K2: the guarantee of strong bones (2) and clean blood vessels
Natural sources of calcium are normally deposited in only two places: bones and teeth. Unfortunately, with aging, abnormal calcium deposits can form in other tissues, such as the inner lining of our arteries .

This phenomenon is known as arteriosclerosis (hardening of the arteries). This is because as we age, the body loses the ability to regulate calcium balance. This then happens in the wrong direction and calcium leaves the bones ( osteoporosis ) to settle in the arteries ( arteriosclerosis ).

Vitamin K2 helps regulate this balance by keeping calcium in the bones instead of allowing it to migrate to the arteries. Indeed, the latest research indicates that vitamin K2 can even reverse the phenomenon of arterial calcification, making it the only currently known treatment for arteriosclerosis.

Vitamin K2: the anti-aging vitamin
We have just explained that as we age, calcium deposits tend to accumulate in the body's soft and deficient tissues, which then become "like stone."

This non-physiological calcification may be involved in many diseases that affect the elderly. This is the case with kidney stones, arthritis, cataracts, heart valve failure, bone fractures, wrinkled skin, senility and, of course, arteriosclerosis affecting the vascular system.

Restoring optimal levels of vitamin K2 helps protect against all of these conditions. Thus, several researchers consider this vitamin one of the most important nutrients to slow aging.

It should be remembered that the liposomal encapsulation technique makes it possible to avoid acid attacks from the stomach and release the product directly into the blood. From there, the fully intact active ingredient is transferred directly to the heart of the cell, where it can be active!

Contents
This product contains 30 milliliters per bottle and has a total net weight of 30 grams.