The store will not work correctly in the case when cookies are disabled.
Menu
Account
Settings
Currency
€ - Euro

•  Has a positive effect on blood circulation.
•  Supports memory and concentration
•  With standardized Ginkgo biloba extract
•  Good for blood circulation, therefore contributes to vision and hearing

90 capsules
€ 26,94
Add to Compare Add to Favorites
Skip to the end of the images gallery 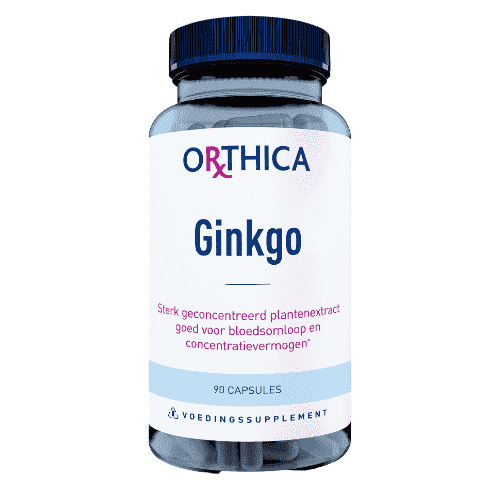 Skip to the beginning of the images gallery

Ginkgo is a natural herb widely used by the elderly. The Ginkgo biloba extract in this dietary supplement comes from the Japanese Temple tree of the same name. Originally, the Ginkgo comes from China, where traditionally the seeds of the ginkgo have long been highly valued for various reasons. The extract in Ginkgo by Orthica is extracted from the dried green leaves of the Ginkgo tree. The daily recommended amount is 2 capsules per day, and this is equivalent to 80 mg of ginkgo biloba extract. This extract is standardized and contains 24% flavonoids and 6% terpene lactones.

To be and stay healthy and fit, a healthy and varied diet is very important. A dietary supplement can only and addition to this. Ginkgo Biloba extract has a beneficial effect on circulation and blood flow. Ginkgo supports memory and concentration. Take the recommended 2 capsules with water, preferably during or right after a meal. Ginkgo is free of gluten, lactose, soy protein, yeast, sucrose, synthetic preservatives, synthetic colors, flavors and fragrances.

Suggested use
The recommended dosage is 2 capsules daily, unless otherwise advised. Preferably take during or after a meal. Do not exceed the recommended daily dosage. Do not use during pregnancy(swens) or lactation. This product may affect the action of medications, especially anticoagulants. Store dry and at room temperature, out of reach of children. A dietary supplement cannot replace a varied diet and a healthy lifestyle. Natural ingredients may cause variation in color.